Craft Beer for the Beginner 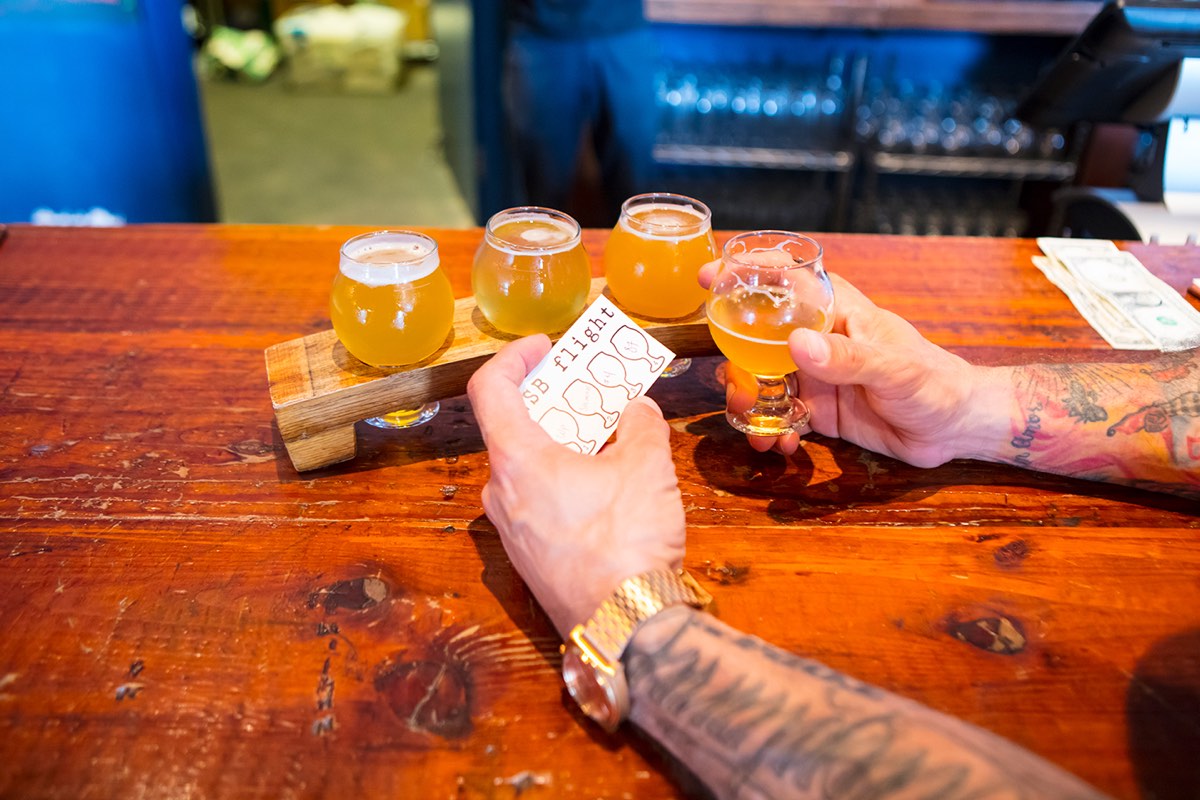 Craft Beer for the Beginner: For Those Who Need A Head Start in the Microbrewery Rat Race

Sweeping the millennial palates of many, re-inventing drinking culture to pique modern interest, heralding a refined, albeit, unpretentious perspective to one of the oldest refreshments our society has to offer, and a personal, exclusive, nouveau spin on a classic recreational spirit..

Yes, wine snobs have a new rival: Craft and microbrew enthusiasts (and they’re not kidding.)

If you’re overwhelmed by the talk of the craft beer craze, and you’re fairly new to it, it’s easy to feel a little lost. That being said, you’re certainly not alone. Did you know there’s over 40 classic styles of beer?

Statistically speaking, in the US alone, a record number of 7000 breweries are in operation as of 2018, according to chief economist Bart Watson of the Brewers Association at the California Craft Beer Summit last September.

How many are those in Massachusetts, you wonder?
Mass.Gov did the research for us! Their website has graciously provided us with a pretty great list of around 130 must-visit breweries for the average enthusiast.

To make things even more interesting, Everett, Massachusetts (Home of The Pioneer )is smack dab in the middle of the action with plenty of cellars and stores stocked to the brim with the stuff, and also lays claim to the foundation of a little something called the “Fermentation District”, an affectionate colloquial term for the Triad of Boston-based brew pubs and independently-owned microbreweries/distilleries stretching the Santilli Highway to Norman Street. (Kind of like Disneyworld... for beer.)

And, much like Disneyworld, it’s easy to get lost in it, and you might be there a while. So, be responsible, call a Lyft or trusted designated driver -- it’s only an eight minute drive from The Pioneer!

However, if you want to take some hobbyist’s advice, time-tested words of guidance and generally agreed upon, start slow. Start small. Develop that acquired taste, find your preferred style, get a sense of what it’s all about first, and branch out from there. Or, the heck with it, throw caution to the wind!. All great journeys start out that way, right? Cans, bottles, drafts, IPAs, stouts, porters, sours, weisses, lagers -- whatever you choose, don’t be afraid to try something you’ve never had before. We’re about exploring here.

We have consulted our most passionate, knowledgeable and seasoned craft beer fanatics, connoisseurs and aficionados to create a list of the top ten craft beers that are a must-try for anyone interested in diving into the vast, fast, unsurpassed growing world of American Craft Beer in the Greater Boston Area -- Just for you! We’re trying to swing a bit of variety in this list too, though it only scrapes the surface of the massive collection of styles available (and we are a little partial to our beloved Boston-Area Breweries, as we made a serious attempt to focus on what’s available locally, whether it’s store-purchased or enjoyable on-site).

Think of it as your personal little starter kit. I suppose we’ll hop to it, (pun absolutely intended) ranked in NO Particular order, of course, without further ado...

Here’s a serious hometown favorite from a familiar Fermentation District alum. Loved by all, feared by none, we consider Whirlpool to be a great, unintimidating, mellow introduction to hops. A solid and preferred choice amongst those in the early stages of their journey, as well as veteran craft beer sages, this brew can be enjoyed anywhere, anytime, (within reason, of course!!) combining the crisp, airy, nonaggressive taste of a light beer with the kick of the accessory, funky hoppiness par the course of a usual NEPA that will leave you wanting it again and again.

So nice, we’re talkin’ about ‘em twice. Night Shift knocked it out of the park with this overwhelmingly popular option for the casual light beer drinker, and made it clear they’re not excluding anyone from their consideration. If you enjoy the crisp, simple, approachable taste you’ll find in an average light beer from a standard domestic distributor, you’ll love Night Shift’s unfiltered and natural take on a modern classic.

Tart yet sweet, fun and totally fresh, unusual but agreeable, up next is a beer from our neighbors at Down The Road for those who aren’t afraid to pucker. We’ll be honest -- this isn’t your conventional Berliner Weisse-style (excuse me… berliner weiße as they say over there), as those typically far more on the side of bitter -- hence why it’s described as most being caught between the line of a sour beer, but allowed a smooth and fruity presentation with minimal hops typical of our German biers. A creamy, pleasant finish will leave a satisfying and inviting impression.

No starter kit is meant to be without a solid, enjoyable, structured American porter beer -- in a sense, a stout beer’s older brother. Don’t let that intimidate you by any means! Much like a stout, these aren’t meant to be downed quickly, and instead paired well with a hearty dinner and a peaceful atmosphere... but are a bit less “heavy” than their stout counterparts -- yet certainly not as light as the others on the list. Focusing more on a malty, sweet and delightful finish, Folktour is without a doubt an ideal, entertaining, and impressive collaborative venture from Down the Road, showcasing and defining the awe-inspiring capability of the company to accommodate and explore various styles, mastering and presenting a version accessible to anyone.

A radler beer is simply Germany’s answer to a British shandy, traditionally a palatable union of a blonde lager with a fruity mixer. Normally associated with summertime, warmer weather, beach-dwelling and leisurely vibes, a radler/shandy picks up the call for a citrusy, effortless and relaxed departure from the usual fare, and is designed to be available for any palate. Jack’s Abby nailed a respectable and highly enticing fruity, easygoing, tangy wheat summer sipper that delights even the most conceited and demanding expectations.

Beerworks Brewing may be one of the oldest and best known sites on this list. In business since 1992, they produce a very large variety of rotating beer, brewed on-site at most Beerworks locations, with much of their library exclusively available on draft -- Blue 92 is notably aromatic and highly carbonated, appropriately adorned and served with blueberries to compliment and enhance the obvious blueberry notes. You can truly delight in a fruity, fresh taste with this choice. (We'd recommend getting a tall!!)

We know, there’s a lot of fruity beers on this list, so we’d love to invite you to discuss the one-and-only, the classic, the gold standard, the beer that put Harpoon on the map AND on the tap! Bringing the west coast to the east, the simply named Harpoon IPA is the definition of the gateway IPA for most New England enthusiasts. You’ll note a great blend of refreshing dryness, mild-yet-noticeable bitter floral hops and malty smoothness, reminiscent of the flavor usually found in the Pacific region. You’ll find the widely-available, highly-acclaimed, award-winning Harpoon IPA either bottled, in can or on draft just about anywhere in the state with a liquor license, for that matter!

We couldn’t forget about another offering from the Santilli Highway family. Bone Up Brewing, a husband and wife venture, focuses on specialty beers with an abundance of rotation and small batch spirits in their library, and they take a strong stance with producing the most natural beers available. Their Key Lime White Ale is a gentle yet discernable nod to the Belgian Witbier influence, and as they’re not particularly fans of adding flavors and syrups to their creations, you’re getting a very wholesome, raw, witbier experience with a lime twist.

If you really think you’re ready for a bold, solid, definitive stout, we’ve got something in mind from Trillium -- grab a snifter, the true way to really take in a silky stout of this caliber, and pour accordingly. Less sweet with light cocoa-accented bitterness, mild caramellish-nutty notes, full-bodied and earthy, the complexity won’t overwhelm but instead intrigue. Will be spectacular on a winter’s eve by a nice fire!

We’re not seeing red! We’ve got so many more beers to talk to you about, but we had to save a spot on this list for the reader who wants to go all-in, and figured it would really hit the spot for those looking for a bold first-hand experience from something other than a stout. Much like an average stout, however, this intense and irresistible dry-hopped Red DIPA is earthy, smooth and spicy, but packs a hoptastic punch with a citrusy undertone. No brakes on this train!

We hope you’re not drinking all of these at once, but if you are, we salute you -- you must really be a budding enthusiast!

If you need help keeping track of your favorite (and not-so-favorite) breweries, stores and beers, we recommend you download Untappd from your app store. You can leave notes, reviews, photographs and a timeline of all the beers you’ve tried along your journey.

If this list provided you with a bit of insight into embarking on a sampling trip, just know that breweries are always prepared to answer questions and find something to suit your liking. >> You Can't Discover What You Don't Explore.